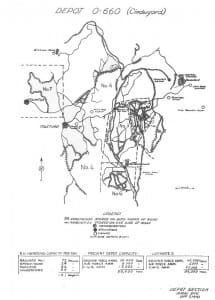 An evacuation of several properties in the Gloucestershire town of Cinderford has taken place after the discovery of 17 suspected WWII mortar bombs by workmen in the area.

The forest surrounding Cinderford was the site of a large US Army Ordnance Depot during WWII, Depot 0-660, which stored a variety of munitions ranging from small arms ammunition to large high explosive bombs. The mortars were found in an an area adjacent to the forest.

An Explosive Ordnance Disposal (EOD) unit from the Royal Logistics Corps attended site and removed the mortars for controlled demolition at a local quarry.

The extent of the US Army depot (see inset) means that it is likely that some items were disposed of in the immediate vicinity during and after WWII as operational requirements dictated.