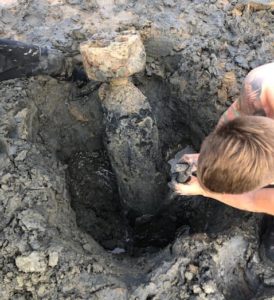 Two suspected anti-submarine devices found on the beach at St Thomas’ Head near Weston-super-Mare resulted in the temporary suspension of flights at Bristol Airport whilst an Explosive Ordnance Disposal (EOD) team was called to the scene.

The items were found by a beach walker who informed the Coastguard, but incoming tides prevented their identification until the following day when an EOD confirmed they were ordnance-related.

On attending the scene, it was determined that they were practice devices (probably sand or concrete-filled) but the decision was taken to destroy them in a controlled explosion.

The coastline at St Thomas’ Head was used as a practice gunnery range during World War Two and it is likely that the uncovered devices relate to training on the range during this period.