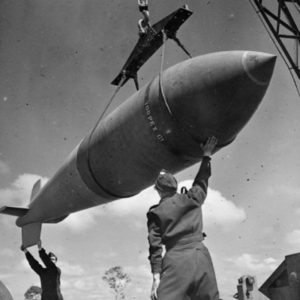 An Explosive Ordnance Disposal (EOD) operation to disarm a 12,000lb British medium capacity bomb (better known as a Tallboy) in Poland has ended in the device detonating.

The bomb had been found a year ago during dredging operations and was always going to prove tricky to safely disarm. 750 residents of the Policy city of Swinoujscie had been evacuated prior to the operation taking place in a Baltic shipping canal.

Given the potential for an accidental detonation, the operation was undertaken using a remote-controlled submersible which attempted to deflagrate the bomb – essentially burning the explosive charge – so that it could be safely removed. As such, no divers or other military personnel were harmed when the bomb exploded.

Designed by the legendary Barnes Wallis, the Tallboy was carried by a modified Avro Lancaster and known as an ‘earthquake bomb’, capable of destroying reinforced structures such as submarine pens and the V2 rocket bases.

854 of the bombs were built and they are rarely found unexploded, although one was uncovered in 1958 in the reservoir of the Sorpe Dam, which had been targeted towards the end of WWII. The Polish bomb is thought to have resulted from a raid against the German cruiser Lützow in 1945.

Only the 22,000lb Grand Slam bomb exceeded the Tallboy in the Royal Air Force (RAF) inventory during WWII.