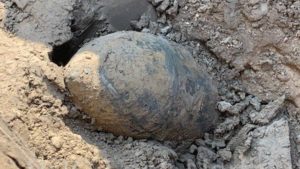 The discovery of a suspected 500lb bomb caused disruption near Goole in East Yorkshire, with part of the M62 motorway and local businesses closed. Some residents were also evacuated after the Unexploded Bomb (UXB) was found during work at a new housing development.

After Police secured the area, an Explosive Ordnance Disposal (EOD) team was called in and they decided that the UXB required detonation in situ. After a couple of days of preparation a controlled explosion was carried out, allowing the motorway and local businesses to re-open.

The origin of the bomb is not completely clear, although it has been suggested that it was jettisoned by a Lancaster bomber that crash-landed in the area during World War Two (WWII).