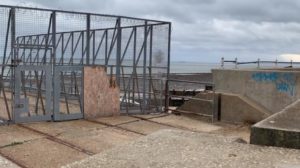 Unexploded Ordnance (UXO) found near Shoeburyness, Essex has been destroyed in a controlled explosion.

The Coastguard had put a cordon around the device (described as a High Explosive Bomb dating from between the 1940s and 1960s) until an Explosive Ordnance Disposal (EOD) team could access it to carry out a safe detonation.

It is believed that the UXO was lodged beneath the barge pier and a substantial safety cordon was required to ensure the detonation could be undertaken safely.

The Shoeburyness Ranges at Foulness Island have long been used by the military for weapons testing and practice, whilst the area around Southend-on-Sea was also heavily bombed by the Luftwaffe during WWII.