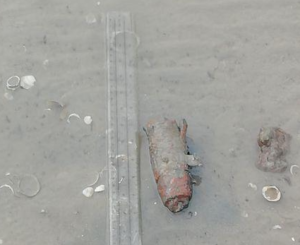 Eight ordnance-related items were removed from the beach at Westcliff near Southend-on-Sea after a bait digger had alerted authorities to a suspect find.

An Explosive Ordnance Disposal (EOD) team was mobilised and they found a range of items washed up on the beach, including spent shells, tail fins and detonators. The items were deemed safe to remove for disposal elsewhere.

The Southend area has a long military history, with numerous former firing ranges nearby, whilst it was on one of the main Luftwaffe flight paths into London during World War One and World War Two.