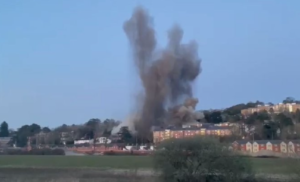 Residents were evacuated from more than 2,500 properties in Exeter after the discovery of a 1,000kg Unexploded Bomb (UXB) during construction works. An initial 100m security cordon was extended to 400m after the attendance to site of a Royal Navy Explosive Ordnance Disposal (EOD) team.

More than 400 tons of sand were brought in to build a mitigation facility ahead of the controlled explosion of the UXB in situ, although some minor blast damage still occurred to nearby properties on detonation.

Exeter was not of great strategic importance to the Germans during WWII but was the first city to be targeted in the so-called ‘Baedeker Raids’, launched against Britain’s culturally and historically important settlements in 1942 following the RAF’s destruction of Lubeck.

Between April and July 1942, heavy air raids were mounted against Exeter by the Luftwaffe. An attack on the 3-4 May was particularly severe, with some 54 tons of bombs dropped in less than an hour by around 30 enemy aircraft. Mixed loads of Incendiary Bombs (IBs) and High Explosive (HE) bombs caused extensive fire and blast damage that left the defences overwhelmed, making it difficult for air raid wardens to record where bombs were falling. Over 1,000 historic buildings were destroyed, with many heavy bombs dropped, including the 1,000kg ‘Hermann’ bombs, nicknamed after Luftwaffe chief Hermann Goering because of their round, ‘fat’ bodies.