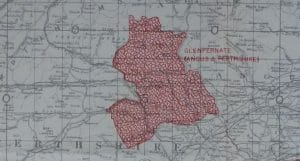 An Explosive Ordnance Disposal (EOD) team was mobilised to the remote location where a controlled explosion was later carried out.

Large parts of rural Scotland were used for military training during the wars and this latest find falls within the boundary of the former Glenfernate Army Artillery Range (see inset), operational during World War Two.