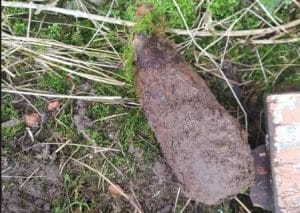 The Police were called, who subsequently brought in an Explosive Ordnance Disposal (EOD) team.  The EOD team confirmed that the device was an expended mortar and removed it for safe disposal.

ROF Rotherwas operated during both World War One and World War Two, responsible for filling a wide variety of munitions with explosives.