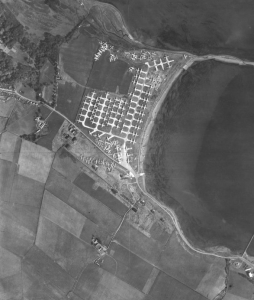 A phosphorus-filled bomblet from WWII has been washed up on the shore of Loch Ryan at Kirkcolm near Stranraer. Described as being 6-8 inches in length and 2 inches in diameter, it is not the first item of Unexploded Ordnance (UXO) to be found in the area.

Kirkcolm was the site of a WWII seaplane base, known as RAF Wig Bay (see inset). It was predominantly used as a servicing and maintenance base but was also tasked with training pilots in anti-submarine operations and was used to break-up redundant seaplanes at the end of the war. At its peak in January 1945, RAF Wig Bay had 1,000 personnel and 170 flying boats in residence.

On the opposite shore of Loch Ryan from Kirkcolm is Cairnryan, which became an important military port during WWII. It was used as an import point for American troops and served as a relief port for the River Mersey and the River Clyde during heavy bombing raids. Towards the end of WWII, an ammunition explosion destroyed one of Cairnryan’s piers.

Cairnryan was subsequently a departure port for vessels dumping chemical munitions in Beaufort’s Dyke in the North Channel in the 1950s.

There is therefore certainly a legacy of military activity in the area that could explain regular finds of UXO.

The Police have prudently issued a warning to walkers that phosphorus devices, whilst not liable to explode, can potentially burn if they have heat applied to them, releasing the filling. The one in question is reputed to have ‘fizzed’ after being prodded by a walker.

It remains to be seen what else will be offered up by the waters of Loch Ryan.