Zetica has undertaken numerous UXO risk assessments for a wide variety of sites across the UK. We have been asked to lead on many prestigious projects, including HS2, the UK’s first new town for more than 30 years, the Lower Thames Crossing Scheme, Heathrow third runway and the London Olympics.  We have also been asked to undertake UXO risk assessments for some of the largest areas of the UK, including for entire counties!

Below is a small sample of the wide variety of projects we have undertaken.

Scope: To undertake a desk-based UXO risk assessment and mitigation plan for the 200km HS2 rail route between London, Birmingham and Lichfield. 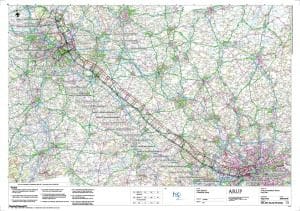 Outcome: Zetica was able to present to the client a colossal amount of information in a manner that was both easy to use and, where appropriate, disseminate it to a wide audience including the client’s team,  contractors and other stakeholders, as well as the general public (as these reports are released into the public domain).

Detailed research and corroboration of sources allowed Zetica to make a confident assessment of the UXO risk.  This included obtaining WWII aerial photography for the entire route (as is standard company practice) which meant that any areas of potential concern could be accurately defined and confidence was gained that nothing untoward had been overlooked.

A semi-quantitative risk assessment was undertaken and a detailed UXO risk zone plan was provided in GIS format to enable the client to overlay their proposed work areas onto the various risk zones.  This enabled an appropriate risk mitigation plan to be devised.

Scope: To undertake a detailed desk study and risk assessment and devise a robust risk mitigation strategy for the UK’s first ‘New Town’ for decades.

The development of the 550ha site is challenging as the majority of the area was a former military airfield and subsequently used as an army training base.  Whilst numerous surveys had been conducted by UXO specialists, ZeticaUXO were the first to fully assess the UXO hazard in detail for the site as a whole and provide a way forward in mitigating any identified risk. 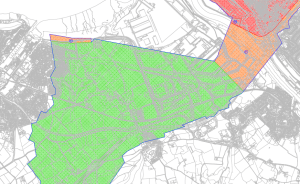 Outcome: The level of detailed research enabled us to accurately zone the entire development in terms of potential UXO hazard and how best to approach each hazard in view of the proposed development.

The end result was a significant reduction of the areas requiring any significant UXO risk mitigation, with the vast majority of the development being revealed as having a low UXO hazard.  This is contrary to the indicators offered by earlier surveys, therefore providing a better commercial setting for the development to go ahead.

Scope: To undertake a detailed UXO desk study and risk assessment for an offshore pipeline route on the Yorkshire coast.

Outcome: We were able to apply our usual high standard of in-depth research to the UXO hazard in the marine environment consulting a wide range of information sources not typically consulted by others. 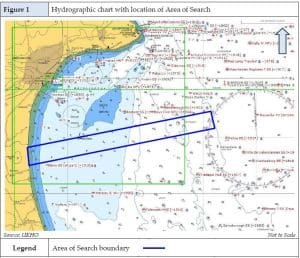 This helped determine that despite cursory indications, there were no significant sources of UXO hazard directly affecting the site.  The study also took into consideration the migration of UXO as a result of offshore tidal currents and erosion patterns.

Through detailed research and an evaluation of site conditions, ZeticaUXO were able to provide the client with the confidence that pipeline construction could go ahead safely.

This is in contrast to the approach typically seen in the UK where a lack of in-depth research and understanding of the hazard means that an ‘err-on-the-side-of-caution’ approach is always required, involving extensive UXO surveys that are typically not required.

“The document Zetica prepared was concise, clear and well-constructed and I would not hesitate to use Zetica again for similar work”.

Scope: ZeticaUXO undertook a desk-based risk assessment for pipeline/cable routing for an area of over 5,000km2 of the UK.

Outcome: Through an initial study and yearly updates, the risk assessment is regularly updated and the project is kept live and ongoing as a requirement of ensuring strategically important infrastructure is kept free of UXO hazards during their further development. The study comprised both detailed route evaluations (where a known route has been decided) and constraint studies assessing the potential risk from UXO and offering either alternative routes or risk mitigation services as required. 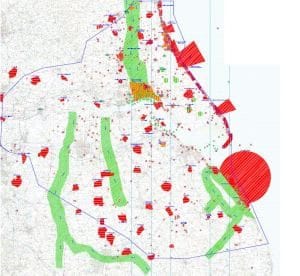 As a result of the desk-based studies, the vast majority of the proposed routes for pipelines were able to be realigned to avoid identified UXO hazards.  Where this was not possible, ZeticaUXO was asked to design suitable surveys that could identify and remove the risk of UXO prior to pipeline construction.

For one area where a pipeline could not be re-routed, a mortar and grenade practice range was identified.  ZeticaUXO was asked to undertake a non-intrusive survey.  This identified a number of potential UXO targets. The targets were investigated and removed.

This approach has been standardized by organisations such as National Grid, based on ZeticaUXO’s work. Every new pipeline or substation installation is subject to a desk based risk assessment which is updated on a yearly basis.

Scope: To undertake a UXO risk assessment for a 1,518km electricity interconnector scheme between Israel and Greece in the Eastern Mediterranean Sea.

Outcome: Our research identified several different sources of potential UXO hazard from over a century of military activity.  This included aerial bombardment, naval and submarine attacks, minefields and ordnance-carrying shipwrecks. 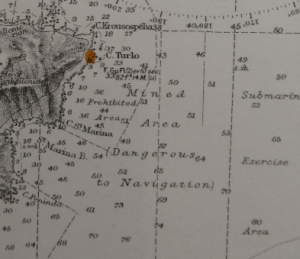 Research was undertaken into the extent of historic and modern-day training areas, accounting for different types of ordnance and operational histories.  Efforts were also made to find UXO clearance records for areas of training and historical minefields that might mitigate the potential UXO hazard.

Using archival documents and historical hydrographic charts to inform the assessment, Zetica’s thorough and in-depth research was able to zone the UXO hazard level on the Site, confidently identifying areas of more and less significant hazard.

A UXO risk register was compiled, concisely identifying different UXO hazard zones and outlining the risk mitigation requirements for each aspect of construction.

Scope: Utilising ZeticaUXO’s experienced research team, we are able to offer clients a unique resource for other sites that, whilst they may not have a potential UXO hazard, present an unusual or complex history requiring specialist in-depth research to establish their past operations. This can help identify unconventional hazards that may not be readily identified by a standard Phase I desk study.

Examples include former medical research facilities and secret government installations. We are often asked to confirm the exact use of a site, including the potential presence of radioactive, biological and other unconventional chemical contamination sources.  Sometimes it is simply a case of identifying where something was buried!

Outcome: By compiling a detailed history of a facility and really getting under the skin of former site operations, our studies are able to accurately record the historic use of each former and existing building on a site.  Such an approach was used as part of a study of a former medical research facility and enabled us to confirm that the presence of significant radioactive contamination on the site was unlikely.

This gave the client some reassurance that any remediation works would be less expensive than thought and that the sale of the site could proceed without significant delay.