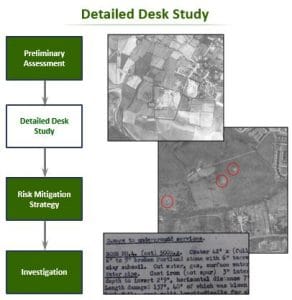 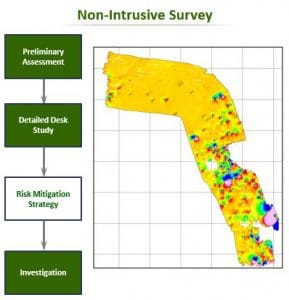 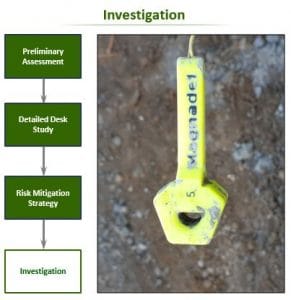 Everything began when the Client downloaded a free Risk Map of their Site from our website.   The Risk Map identified some potentially significant World War Two (WWII) bombing densities and potential Luftwaffe targets in the vicinity of the Site.

To understand  how to proceed, the Client requested a free Pre-Desk Study Assessment (PDSA) which concluded that a detailed Desk Study was necessary to fully understand the Unexploded Ordnance (UXO) hazard on the Site.

Our comprehensive understanding of WWII bombing on the Site meant we were able to zone an area of moderate UXO hazard.

The data was processed, analysed and modelled back at the office, with further interpretation by a geophysicist.  A total of 76No. metallic targets were selected for further investigation.

One of Zetica’s Explosive Ordnance Clearance (EOC) Engineers then investigated each of the targets to confirm them as UXB or not.

Several metallic objects were encountered, such as a magnadet detonator which was linked to a nearby tunnelling project.

Upon completion, no UXB or any other form of UXO was discovered and the Client’s works were able to continue.

From the initial Preliminary Assessment to the final Investigation of the Site, Zetica was able to help the Client manage the potential UXO risk on the Site safely, discretely and pragmatically.