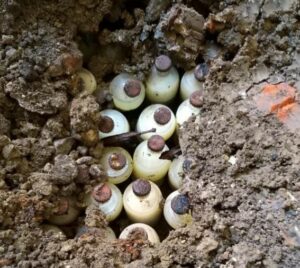 Workers at an old school site in Swindon were surprised after discovering a cache of self-igniting phosphorus (SIP) grenades approximately 600mm below ground.

SIP grenades were a favourite weapon of the Home Guard during World War Two, designed as a crude but effective anti-tank measure. Comprising glass bottles (often milk bottles), they were filled with benzene, water, crude rubber and, notably, white phosphorus. White phosphorus ignites when exposed to air and it is fortunate that the Swindon workers did not break any of the bottles.

Often stored in milk crates, SIP grenades are commonly found by the dozen and predicting where they might be found is almost impossible.

Police put in place a 100m security cordon prior to the attendance of an Explosive Ordnance Disposal (EOD) team.