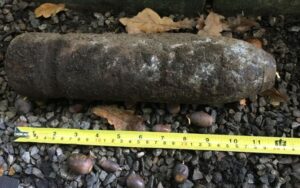 A resident in Hersham near Walton-on-Thames in Surrey got a surprise when he found a suspected unexploded shell whilst installing some fencing in his garden.

After the fire service was called, local properties were temporarily evacuated. An Explosive Ordnance Disposal (EOD) team was mobilised to assess the shell. It was later removed for a controlled detonation on nearby open land.