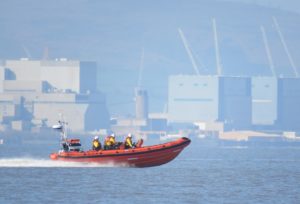 Preparations are being made for a controlled explosion after a suspected 250-pound Unexploded Bomb (UXB) was found on the seabed near Hinkley Point power station in Somerset.

The device was found by the marine principal contractor for the Hinkley Point C development. An exclusion zone for vessels has been placed around the device prior to an Explosive Ordnance Disposal (EOD) team from the Royal Navy attending to make it safe.

The Bristol Channel was extensively used for bombing and gunnery practice during World War Two (WWII) and was also subjected to German aircraft jettisoning unused bombs after heavy raids on Bristol.