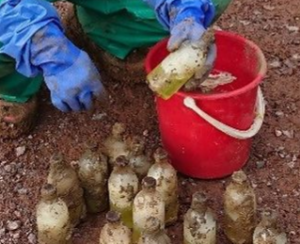 A cache of suspected Self-Igniting Phosphorus (SIP) grenades has been found on a building site in Cambridge. During ground works, one of the grenades caused a fire in an excavator bucket and the Explosive Ordnance Disposal (EOD) team was subsequently called.

A planned controlled explosion of the devices was delayed overnight as dusk fell, with the detonation taking place in the morning.

SIP grenades were a staple part of the Home Guard’s armoury during WWII and are regularly found on building sites across the country.  They are often uncovered in areas surrounding former military airfields, which the Home Guard defended during the war.  The white phosphorus filling of the SIP grenade is particularly volatile when exposed to air.

21st December Update: 40No. SIP grenades have now been uncovered at the site.

2nd February 2018 Update: A staggering 194No. SIP grenades have now been removed from the site.