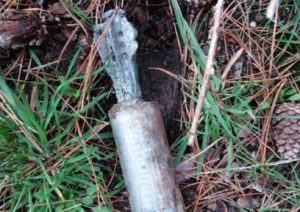 A controlled explosion was carried out after an unexploded mortar was found in Thetford Forest. A member of the public discovered the device and recognised it immediately, alerting the Police who then mobilised an Explosive Ordnance Disposal (EOD) team.

The EOD team undertook a controlled detonation of the mortar in situ.

Thetford Forest was long used as a major military training area, particularly during the World Wars.  The British Army still undertakes firing practice on dedicated ranges within the forest.