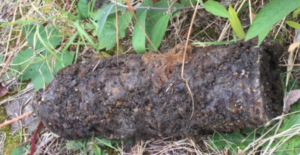 After realising the potentially hazardous nature of the device, the workmen called in the Police who put a security cordon in place prior to the arrival of an Explosive Ordnance Disposal (EOD) team.

The EOD team removed the device for safe disposal elsewhere.

Many thousands of Anti-Aircraft (AA) shells were fired in defence from heavy gun batteries during German air raids on London during World War Two.