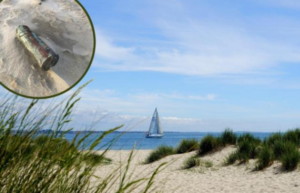 Part of the beach at Shell Bay in Studland, Dorset was cordoned off after a diver discovered suspected Unexploded Ordnance (UXO) on the seabed.

Swanage Coastguard was initially informed after fears that the diver had gone missing but after making contact were presented with the potential UXO.

An Explosive Ordnance Disposal (EOD) team was mobilised to deal with the item, which was identified as a suspected unexploded shell.