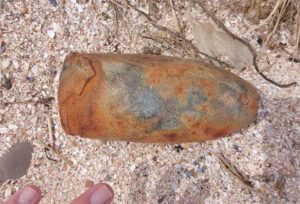 The beach at Leysdown near Sheerness was closed after the discovery of a suspected unexploded shell by a member of the public.

After the Police were informed, the Coastguard put in place a security cordon prior to the attendance of an Explosive Ordnance Disposal (EOD) team. The EOD team were able to remove the device from the scene.