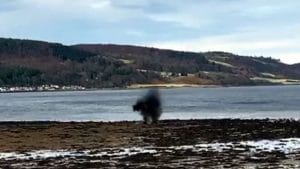 There were temporary road closures near the ground of Inverness Caledonian Thistle after the discovery of Unexploded Ordnance (UXO) on the nearby shore.

Two members of the public found the device (nature unconfirmed) and alerted the Coastguard who kept watch until an Explosive Ordnance Disposal (EOD) team arrived.  The EOD team carried out a controlled explosion.

Parts of the coastline between Inverness and Ardersier were used for military training during the World Wars and UXO is periodically washed up or exposed after storms.