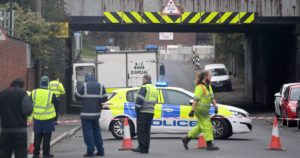 Roads and railways were closed in Manchester after a magnet fisherman found a suspected unexploded shell in the Rochdale Canal.

The shell was pulled from the canal in the Newton Heath district and prompted Police attendance and security cordons to be put in place, including the evacuation of buildings.

An Explosive Ordnance Disposal (EOD) team was mobilised and they confirmed that the shell was inert, allowing its safe removal.